With the generalization of teleworking and back and forth between work and home, many people have renewed their equipment in recent months or are considering doing so. This is particularly the case for creative professionals who also have specific needs that must go beyond simple office tasks that any machine is capable of performing.

Huawei has just decided to address creative people with a new machine, the Matebook 16. This is not the first time that the brand has offered a laptop with this screen format since we were able to test the Matebook D16 Last year. But if it shares the screen size, the Matebook 16 model that we are going to discover is very different on several points.

However, we keep the characteristic look of Huawei PCs with a gray cover and brand engraving. The first surprise comes from the charger which has an imposing size and the mention “135W”. This super charger will be able to restore 3h30 of autonomy to the machine in just 15 minutes of charging. 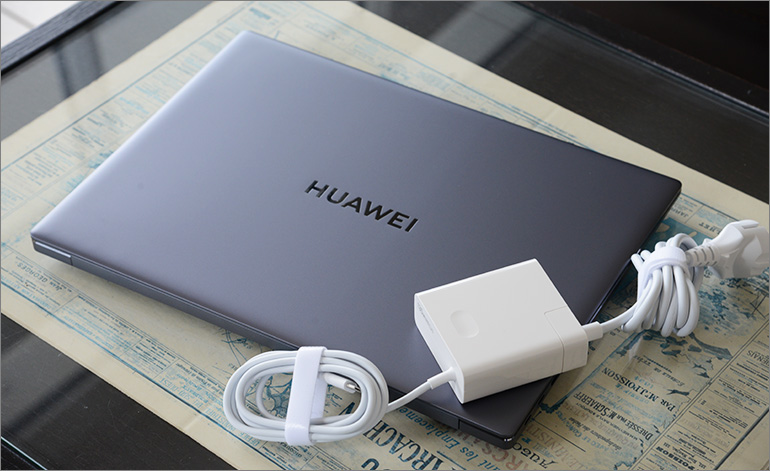 Under the frame there are two rubber feet along the entire length that will slightly raise the device to allow proper ventilation. 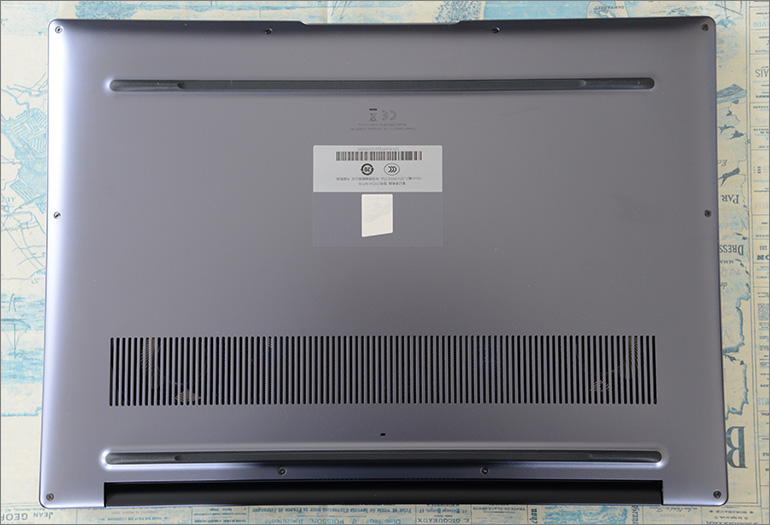 The charger will connect on the left side to one of the two USB-C ports which also support data transfer and DisplayPort. An HDMI socket and an audio/microphone jack port accompany them.

On the other side are simply two USB 3.2 Gen1 sockets. Above you can see the power button which acts as a fingerprint reader. Having tried it on other Huawei PC models, we know that it is very responsive, a single press triggers the start of the PC and authentication with instant login. 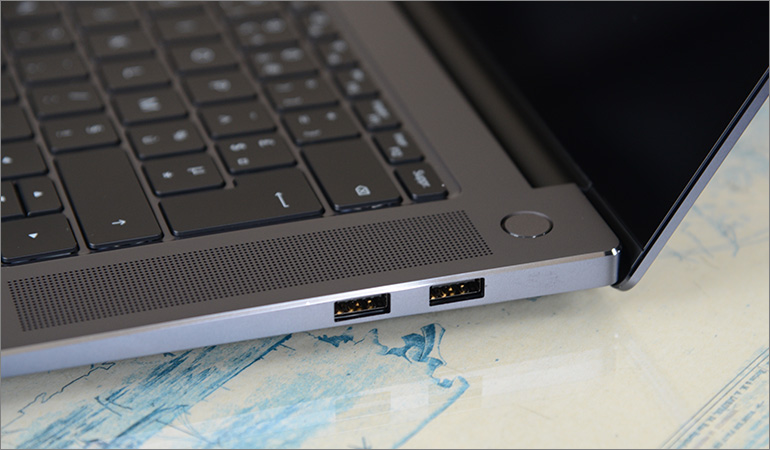 Another difference with the D16 is the size of the trackpad, which has grown considerably, providing comfortable space for all tasks. The keyboard is strictly identical with the difference that it does not include the speakers in its frame, positioned a little apart on either side. 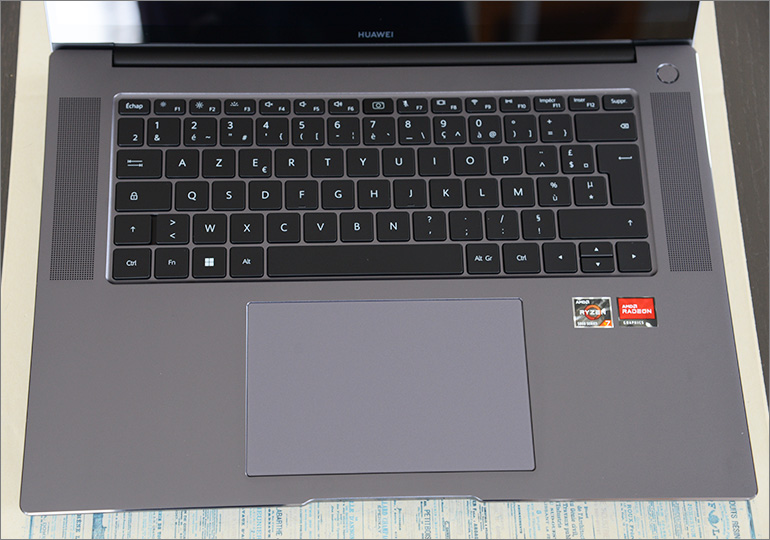 The screen has also evolved, if the size of 16 inches is the same, we are here in the presence of a display in 3:2 format rather than 16:9. If one is more practical for entertainment, this one is more suitable for applications at height, long web pages or office documents, but also for creativity applications and their tools.

The Huawei Matebook 16 has a nice screen-to-body ratio of 90% with very thin bezels that enhance the display. Even though the device is heavier than a smaller model (2 kg), Huawei has managed to keep the thickness reduced with less than 18mm. 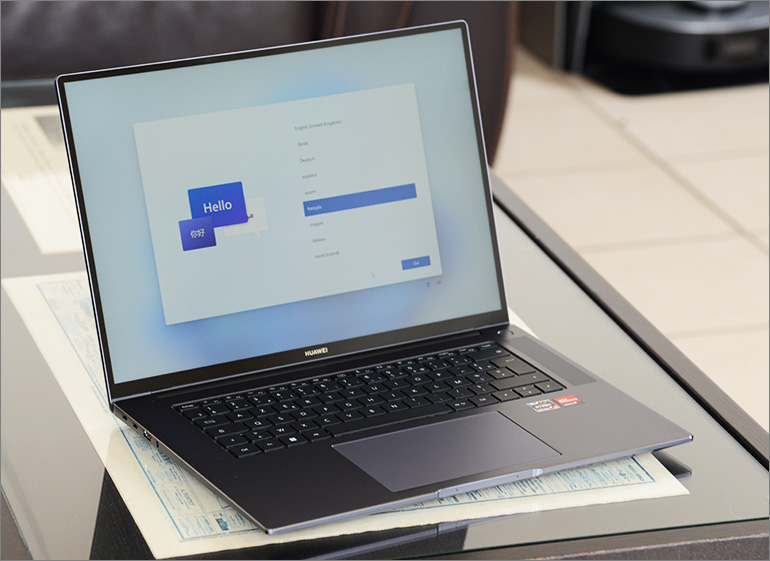 This is made possible in particular by the absence of a webcam at the top of the screen. This one, with a 720p HD definition, is hidden in a key on the keyboard. The other advantage is the confidentiality created by this “hiding place”. However, this does not make an optimal viewing angle for video sessions. 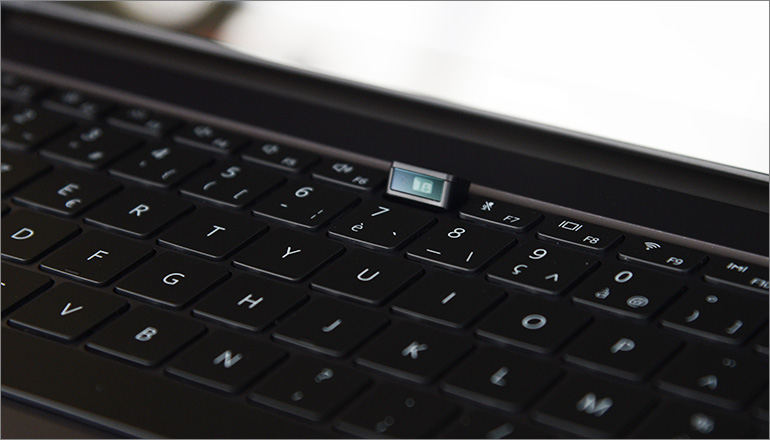 The other advantages of this model are inside with an interesting configuration on paper:

On the other hand Huawei has ignored the latest communication standards by keeping a Wifi 5 module rather than Wifi 6 and Bluetooth 5.0.

Even before launching the first benchmarks we feel that the device has power under the hood. Starting up Windows 11 almost seems like coming out of sleep, the start-up is so fast, especially since the fingerprint reader identifies us from the first press and opens the session very smoothly.

At the software level, in addition to the “Link Now” collaborative software rather intended for professionals, there is the usual Huawei PC Manager utility which will be used for various tasks, to link a telephone or an external screen, but also for updating drivers without snooping on the manufacturer’s site to keep them up to date. 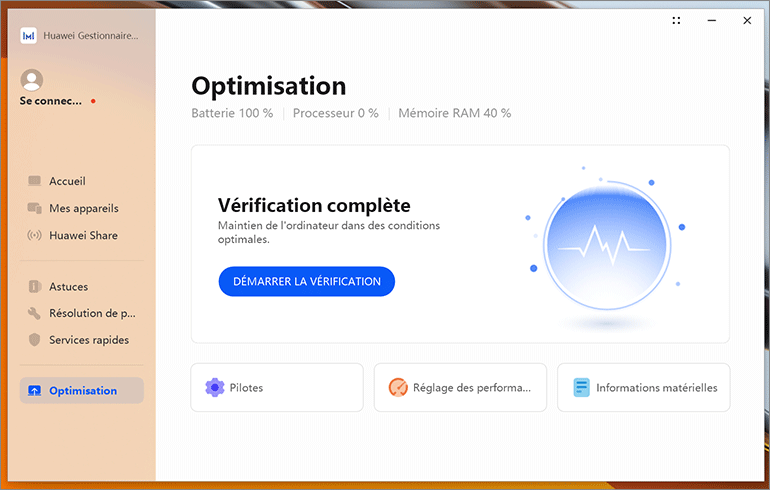 The software also provides access to a shortcut to change the performance mode. By default it is set to balanced and the user can switch it to “Performance”. We launched our tests in the default mode and then repeated them in Performance mode, obtaining identical results. The system therefore correctly manages the power dosage when requested without necessarily having to change the mode manually. 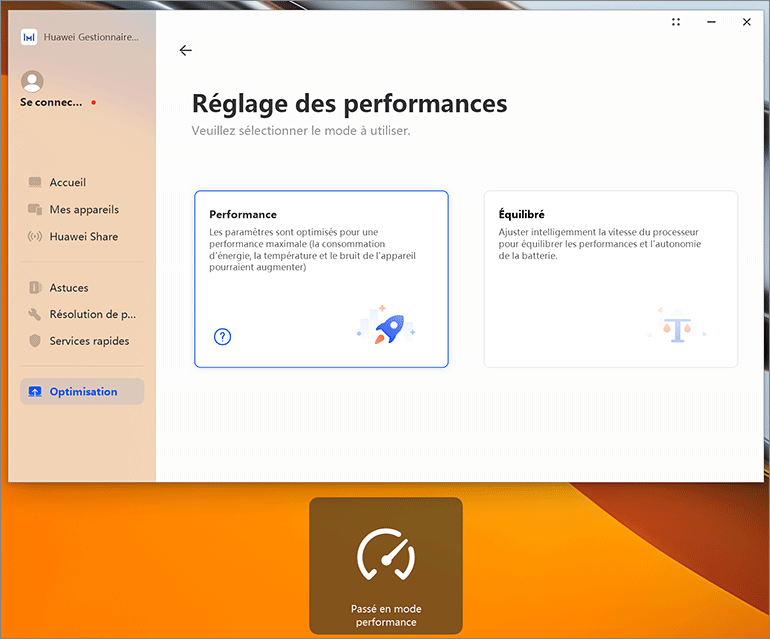 With the Novabench software we obtained a very good score of 3434 points. Under Geekbench the monocore test gives a result of 1498 and 7612 in multicore while the GPU test resulted in a score of 16089 points. This is the best result obtained by a “non-gamer PC”. At the processor level, it is almost on a par with an Asus ROG Zephyrus G14 or an HP Omen 15. The latter obviously do better at the graphics level thanks to their dedicated cards. 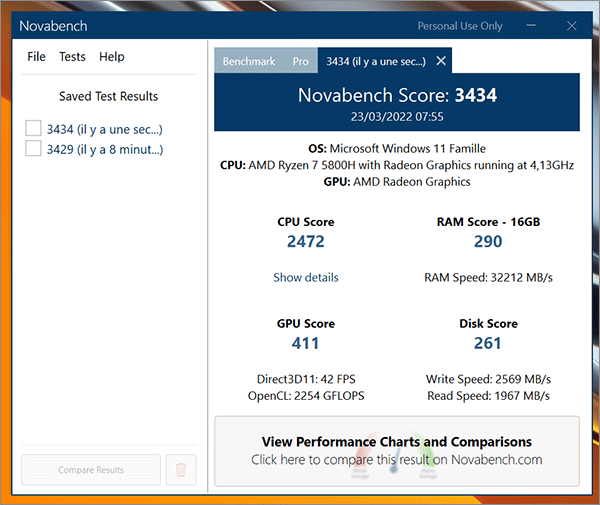 With a 2.5k screen such as this and its good performance, we logically expected to see the battery icon melt like snow in the sun during our usual wifi streaming test with the brightness set to 50%. This is not the case and the Matebook 16 lasted almost 12 hours under these conditions, which is a very good result for this configuration.

In terms of competition in this screen size, two alternatives may be interesting for those looking for a 16-inch laptop. To promote power mobility, we can turn to the very light LG Gram 16 (1.19 kg against 2 kg for the Matebook 16). If you are aiming for a lower budget and/or multimedia use, the Matebook D16 from the same brand with its 16:9 screen and its honorable performance can represent a good compromise.

In the end, this Huawei Matebook 16 leaves an excellent impression and we can hardly blame it if it is not for the position of the webcam hidden under the keyboard which might not please everyone. We also find this saving on communications surprising with the absence of Wifi 6 in 2022.

The spacious trackpad and the beautiful screen in 3:2 format are very comfortable to work on. Even if this size is not ideal for mobility on paper, the 2kg for a 16 inch is not excessive either. Those who need to have a computer with them with great power at a very reasonable price will adopt it without regret, especially since the autonomy is far from ridiculous for this type of machine.