Among the so-called “hybrid” laptops, you can find several types of devices such as those whose 360-degree hinge allows you to turn into a tablet or those with a detachable keyboard. The most popular is probably the tablet Microsoft Surface Probut Huawei is now offering a similar product.

The Matebook E tablet has an air of Matepad Pro, Huawei’s other tablet that runs Android. But this time it is Windows 11 that runs the whole thing, which suggests a more flexible use since we can use any Windows application, but also soon some Android applications.

The Huawei Matebook E tablet comes in a pack with its keyboard and the second generation HUAWEI M-Pencil stylus. There is also the usual Huawei charger and its USB-C cable. 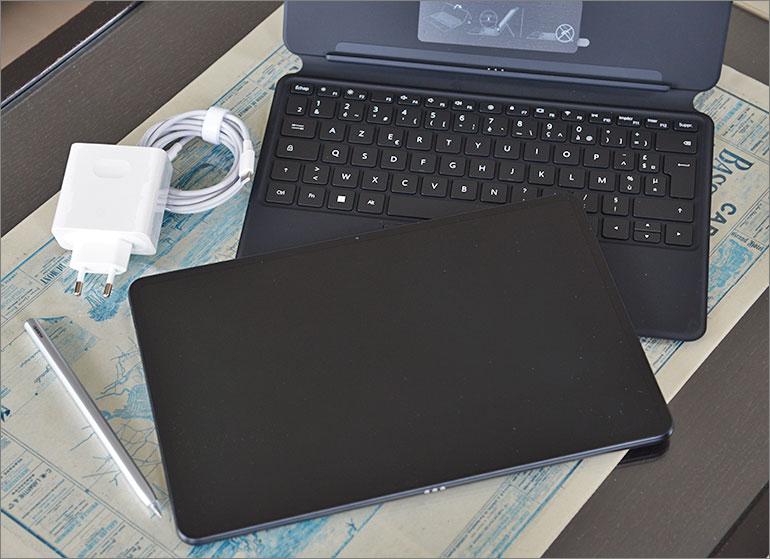 The stylus is very lightweight and attaches magnetically to the top of the device, above the webcam, for charging and connecting. On the other hand, this location does not offer a support powerful enough to transport it without the risk of losing it.

When you hold the tablet horizontally, as when it is connected to the keyboard, the USB-C charging socket is located on the right edge. Thunderbolt 4 compatible, it also supports DisplayPort.

At the bottom left is the 2-in-1 mini-jack for headphones and microphone.

At the top left the power button and the volume control are located on either side of the corner of the tablet. The first also serves as a fingerprint reader to unlock the device via Windows Hello. It is rather thin, but effective according to our first tests.

We can also see the rear camera and the LED which illuminates in dark situations so that the 13 million pixel sensor does its job. The Matebook E tablet also has an 8 million pixel webcam on the front for video conferencing sessions.

Once in place, the keyboard also acts as a cover to close the device and protect the screen (standby is thus automatically triggered). Half of the surface folds to act as a support which ensures a stable hold of the whole. 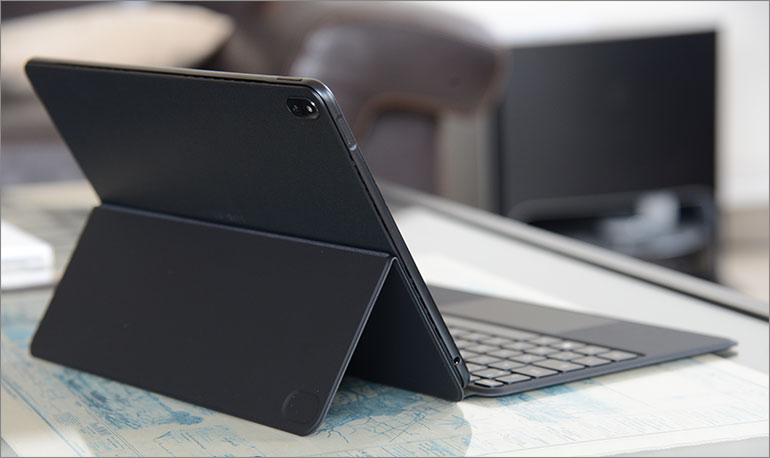 The keyboard is quite well made for a detachable element and is well worth those of traditional laptops. The trackpad is a little less qualitative to the touch, but does what is asked of it if you don’t want to use an additional mouse.

Everything offers a pleasant design with a flattering 12.6-inch screen in 16:10 format, a frame-to-screen ratio of 90% and a definition of 2560 x 1600 pixels. The brightness is sufficient in most situations, but a little tight in bright light outdoors and keeping it at maximum power will have a logical impact on the battery. 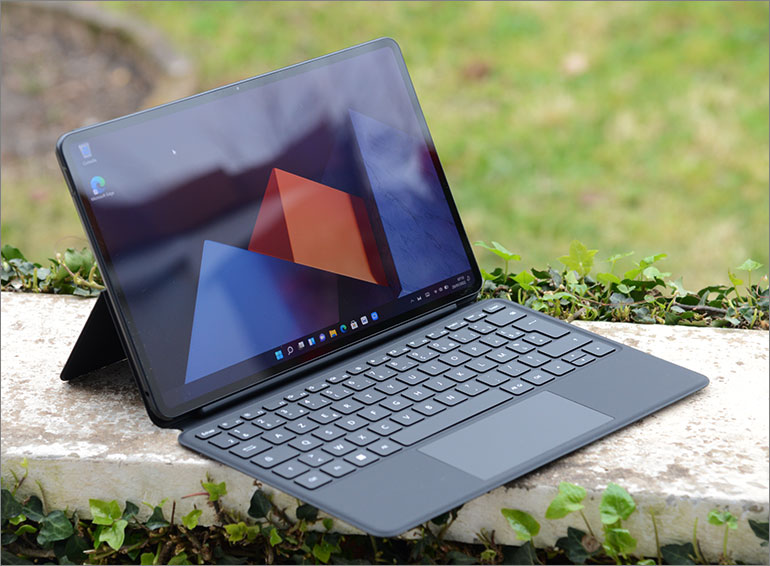 On the software side Windows 11 starts very quickly. It is sometimes aided by biometric authentication via the fingerprint sensor placed on the power button. Sometimes only, because the size of the button being small, it is necessary from time to time to take it twice before being correctly recognized. The use of facial recognition would have been preferable for this format of PC.

We find the usual Huawei PC Manager in the list of programs. Already useful before, the utility is still as much in this version with a renewed design. It allows you to manage optimization operations, driver recovery or switching from one performance mode to another. 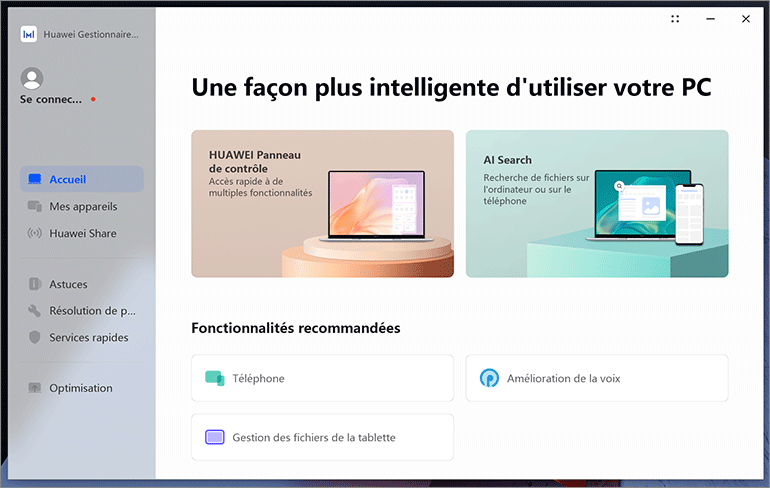 The presence of the stylus is also well managed in the operating system. When the device is sufficiently charged by induction on its dedicated location, it is immediately recognized and a window invites the user to connect it. 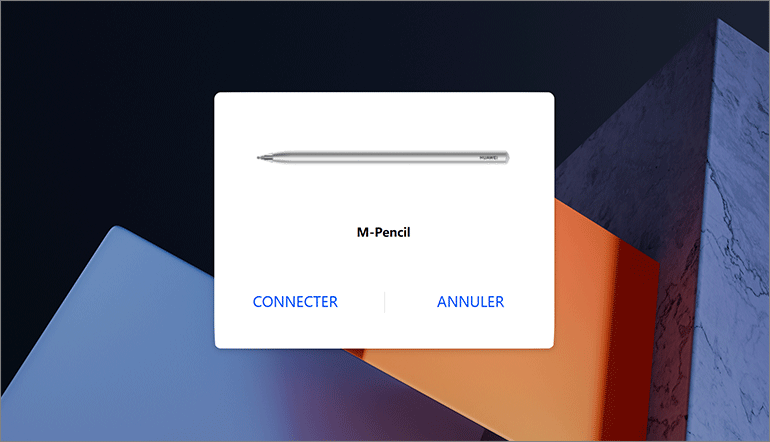 We received the model with the 11th Gen Intel Core i5-1130G7 processor with 16GB of RAM and 512GB of storage. A more modest version equipped with a Core i3-1110G4 is also available. The most powerful version provided good results in Novabench for a PC of this size with 2054 points. On the Geekbench side, we obtain 1341 points in monocore, 4718 in multi-core and 13346 at the GPU level. 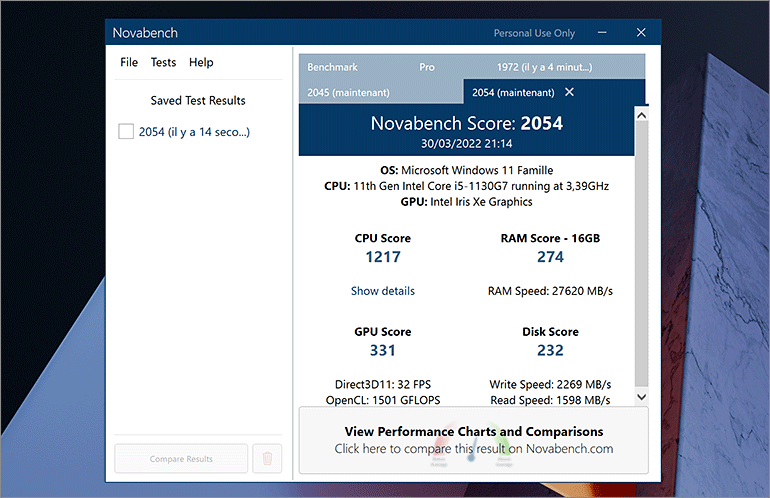 This is enough to consider being able to operate greedy software while being on the move. This brings us directly to the question of autonomy, a crucial point for this type of device which is easily transported thanks to a contained size and weight (709 grams without the keyboard).

We therefore subjected it to the same test as its competitors by streaming a series with the sound at 40% and the brightness at 50%. The latter seemed to go wrong automatically during the test and this may have affected the result a little, but it is clear: the autonomy is insufficient with only 5h30 where other traditional PC models of size modest manage to last more than 10 hours.

A Surface Laptop Go which is also well cut for mobility lasted 8:30 in this test and could be a good alternative. If you want a model with a detachable keyboard, it is impossible not to mention Microsoft’s best seller, the Surface Pro 8. Even if the starting price of the latter seems cheaper, it will however cost a little more in an equivalent configuration if we count the purchase of the keyboard and the stylus that Huawei automatically integrates with the Intel Core i5-1130G7 model.

Until this stage of the battery life test, the tablet was very well placed to be an interesting solution for those who want to travel light. Unfortunately, with a battery that is too tight, you will have to take the charger with you to hope to last a full working day. On the side of the regrets we can also mention the absence of a second USB port or a storage solution for the stylus.

Those for whom autonomy is not a problem will, on the other hand, be able to take advantage of a lot of advantages, and first of all good performance for such a small and light device. Its quality screen will highlight the content in the best way, with very good audio quality. Finally, its price is rather interesting if we take into account the fact that the keyboard and the stylus are delivered by default.

Note that the tablet is currently on presale on the Huawei site at the price of 1099€ instead of 1399 with keyboard and stylus.