As its name suggests, Microsoft’s Surface Go 3 tablet is the third version of this “Go” line, which designates Surface devices that are more accessible at the price level. With an attractive starting price set at 439 euros, however, it is necessary to pay attention to the model chosen. At this price it’s a Pentium processor, 4GB of RAM and 64GB of storage, without a keyboard.

The version we are going to test today is a little more acceptable in terms of configuration with an Intel Core i3 processor, 8 GB of RAM and 128 GB of SSD storage. Even without a keyboard, this already raises the price to 679 euros and count around 750 euros to add a keyboard.

In the package we therefore find the tablet and its optional keyboard, as well as a charger which is connected magnetically. This has the advantage of avoiding dropping the device if you trip over the cable, and the disadvantage of having to handle the device under load more carefully if you don’t want it to come off. 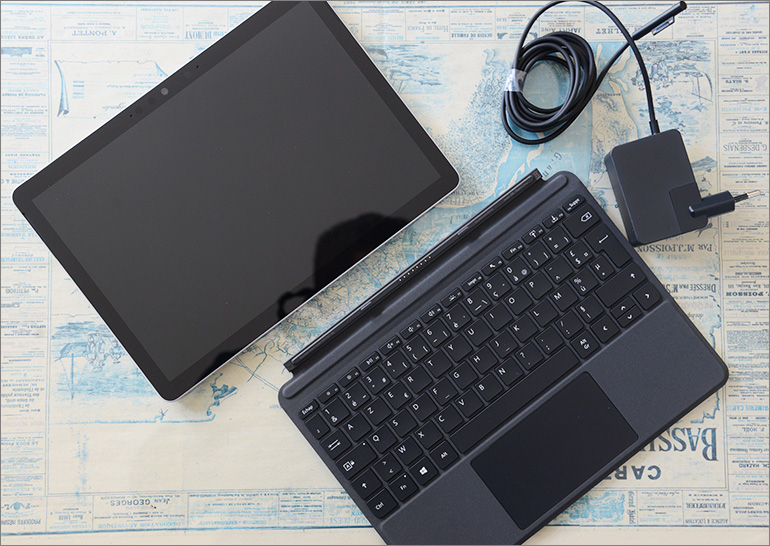 On the top of the device, we find the power button as well as those that control the volume. 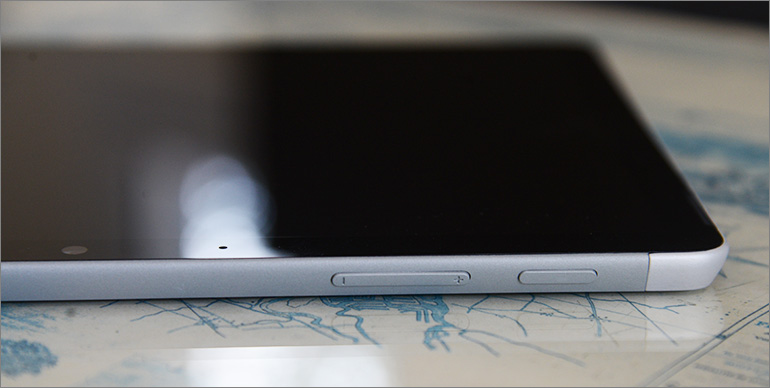 On the right we can see the famous magnetic charging port, a single USB-C port and the mini-jack audio port. To connect several peripherals, it will therefore be necessary to go through a hub.

The Surface GO 3 has a 5-megapixel 1080p webcam on the front that sits around the wide edges of the device. There is also an 8-megapixel 1080p rear camera. Note that the front camera is Windows Hello compatible and allows you to unlock the device with facial recognition, which is quite practical.

The characteristic Surface foot is integrated into the shell of the device and allows you to position the tablet upright by varying the angles of inclination as much as desired. 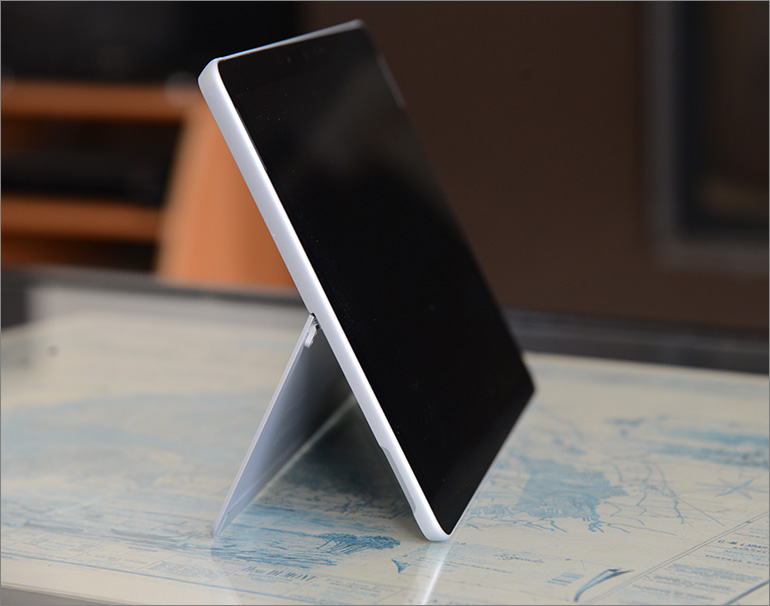 The keyboard is very simply fixed thanks to the magnetic connector under the tablet.

The keyboard is held firmly, the Go 3 can be used as a PC. It folds over the screen and thus acts as protection. 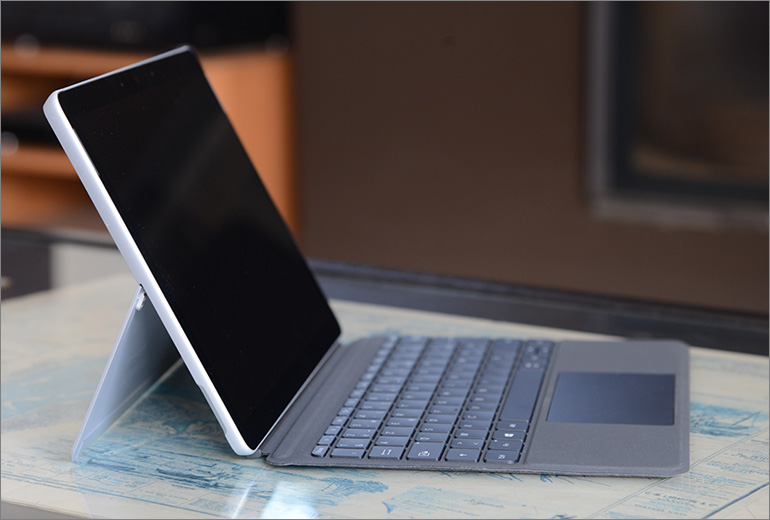 The set runs on Windows 11 and offers a beautiful display thanks to a 10.5-inch PixelSense touchscreen with a resolution of 1920×1280 pixels (220 DPI). In 3:2 format it is suitable for office tasks. The set is pleasant to handle and the display quality is there even if Microsoft could have made a small effort to reduce the black borders which still take up a lot of space.

Without keyboard, with its 544 grams (add 300 grams for the keyboard), the tablet will easily find a place in a bag. It connects to the network using Wifi 6. Note that there is a 4G version of the tablet in order to be able to take advantage of mobile networks when no Wifi network is available.

Windows 11 comes by default in “S Mode”, i.e. it only accepts installation of applications from the Microsoft Store. It also reduces the risk of viruses. As we have seen, it is very simple to deactivate it to be able to install classic executable software. Please note, however, that it is no longer possible to return to Mode S afterwards. 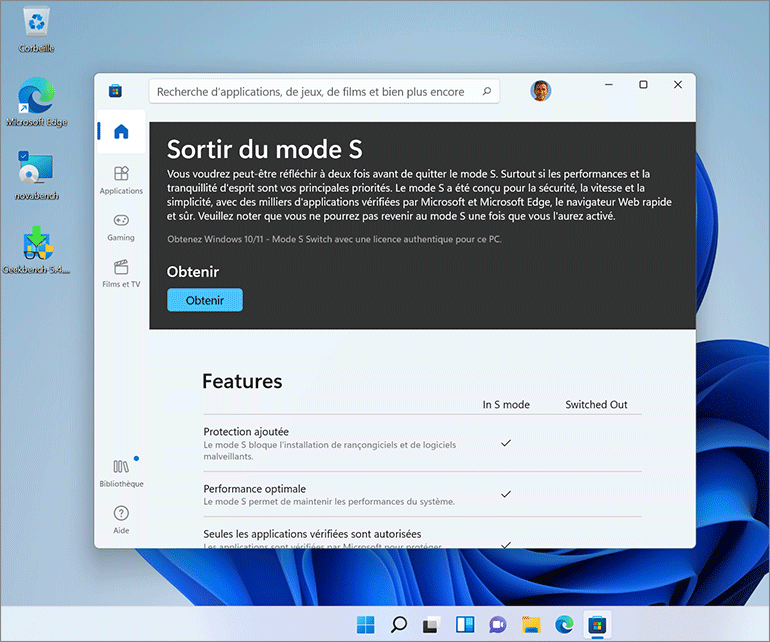 This allowed us to install our usual Benchmark software, including Novabench, which gives it a very modest score of 905 points. Geekbench follows this trend with 949 in single-core, 1617 in multi-core and 4204 at the GPU level. Most of the laptops we test do at least twice this score, such as the Surface Laptop Go PC for example. And again this is the configuration with Intel Core i3 and not the Pentium model. 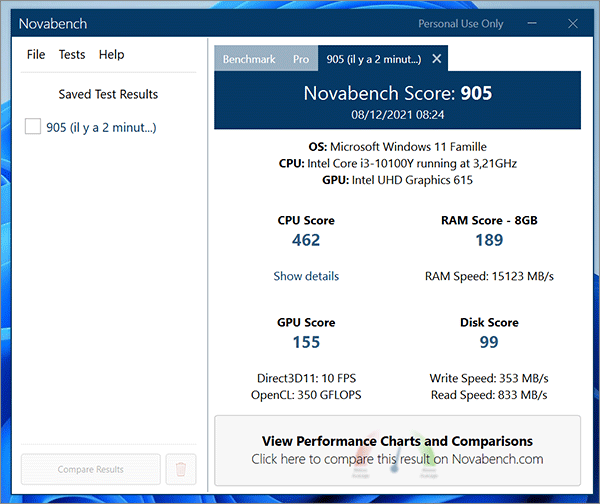 With this score so low at the power level, we could hope for significant autonomy and that Microsoft had bet on this point. It is also disappointing with only 7:30 in our WiFi streaming viewing test with brightness at 50% and sound volume at 40%.

If we discard the tablet aspect, much more powerful alternatives exist. For the same price with a more muscular configuration, the Core i5 version of the Surface Laptop Go at 750 euros does much better. For a larger screen and almost double the battery life, you can also turn to the Lenovo Yoga Slim 7 14ARE05.

Because it is indeed at the level of power that the tablet sins. Despite a fairly fluid Windows 11, it will only be entrusted with light tasks in office automation, Internet consultation or streaming viewing. The autonomy which is not extraordinary does not make it possible to compensate for this negative point.

If the budget is not a problem, we still retain a few points that could be worth supporters of the Microsoft Surface Go 3. With a featherweight and its ability to act as a troubleshooting PC, it can be a good ally in mobility status. It incorporates the latest Wifi 6 standard, exists in a 4G version and verification with facial recognition are also arguments to be credited to it.