Huawei has already impressed us this year with the launch of its
smartphone P50 Prowith an excellent camera, but the company has not finished with the novelties since it presented a whole range of new “Smart Office” products at the Mobile World Congress of this year.

We were able to discover the MateBook X Pro laptop, the MateBook E convertible tablet, the all-in-one desktop computer MateStation X and the MatePad Paper tablet.

The MateBook X Pro is the brand’s most capable laptop to date. It features the latest Intel Core i7 processor and an advanced cooling system that Huawei claims improves airflow by 60%. This should allow this processor to perform at its peak for more demanding tasks like video or photo editing, while remaining within acceptable operating temperatures. 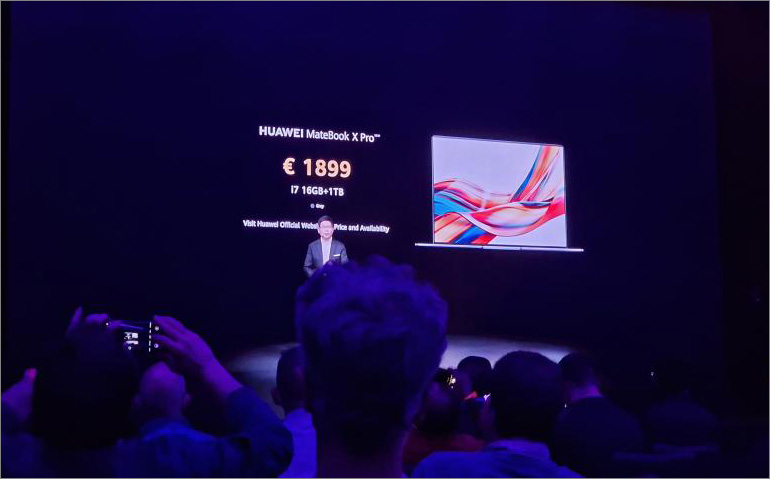 The laptop itself has an all-metal design, features a 3120×2080 pixel touchscreen, a webcam on the top of the display, and 90W fast charging. According to Huawei, three hours of use can be obtained with a charge of only 15 minutes thanks to the supplied charger. 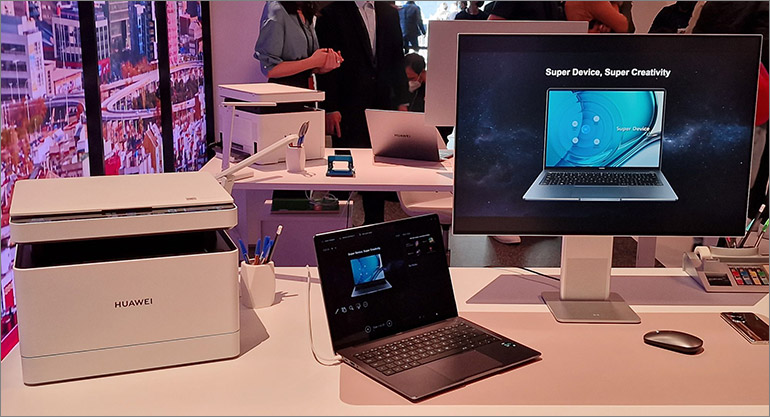 The MateBook E convertible tablet can be considered as an alternative to Microsoft’s Surface tablet. The design is similar, with a slim 7.9mm body and a 12.6-inch OLED display. Huawei says the display has a 1 million:1 contrast ratio and great color accuracy, a boon for photographers and other creative professionals who want to show off their work at their best.

It features 11th Gen Intel Core processors and runs Windows 11, which offers various gesture optimizations for people using the software in tablet mode. A magnetic keyboard is available, however, as well as a “glide” keyboard that acts as a stand and has its own USB-C charging port. 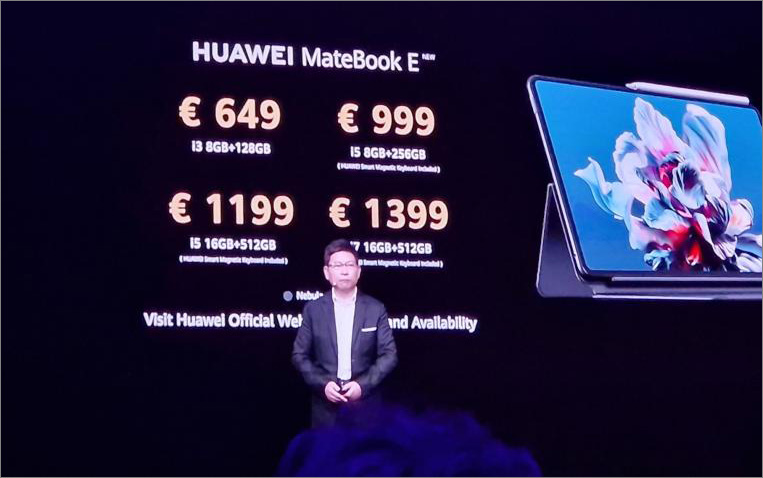 For those who want a larger desktop machine, the MateStation X could be an attractive option. This all-in-one desktop computer offers a 28.2-inch touchscreen display with a resolution of 3840×2560 pixels, with a very thin bezel around the screen. It’s mounted on a hinge that should allow it to be moved into convenient working positions, especially for creative work using Huawei’s M Pencil stylus.

It features an all-metal design, triple speakers made by French audio company Devialet, and runs on AMD Ryzen 5000H processors, along with 16GB of RAM and 1TB of storage. 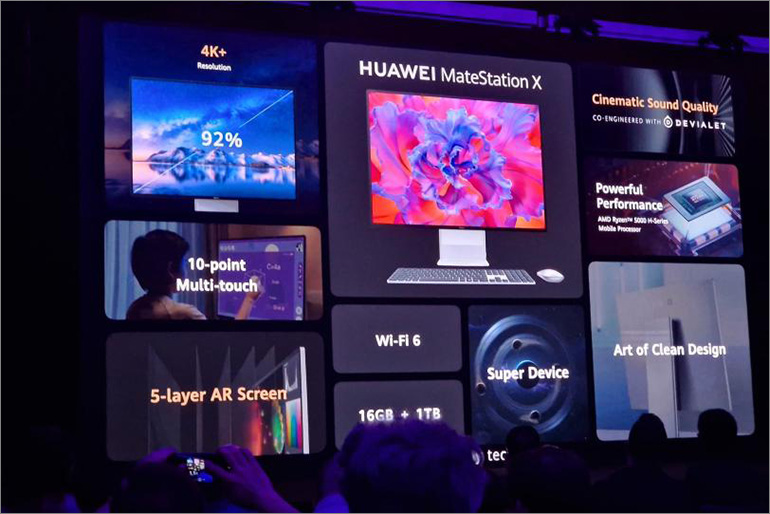 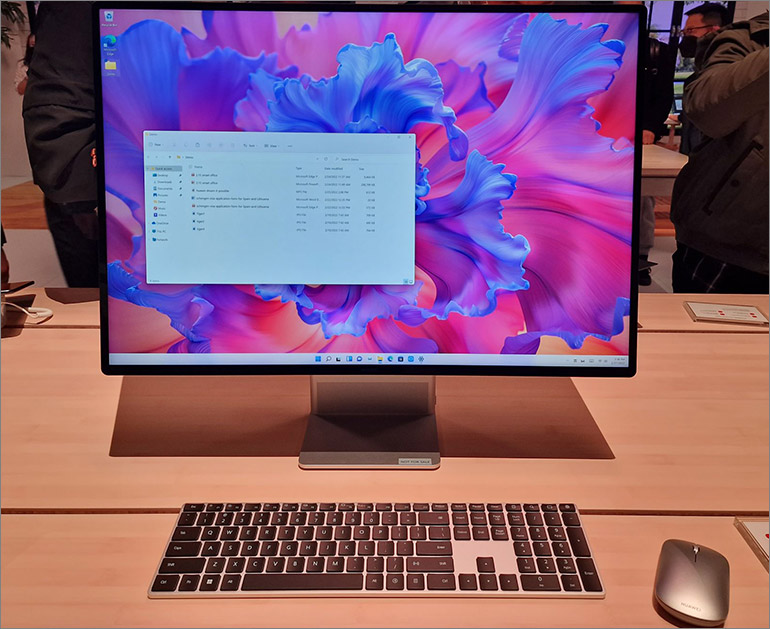 Finally, we have the eccentric MatePad Paper, a 10.3-inch tablet that uses an E Ink screen – the kind of screen that equips, for example, the Kindle e-reader. It’s designed as both an e-book reader and a notepad (it supports handwriting with Huawei’s M Pencil) and could be a handy tool for taking quick notes during meetings.

It converts handwritten notes to text, has a voice memo feature, and lets you easily annotate PDFs and other documents. 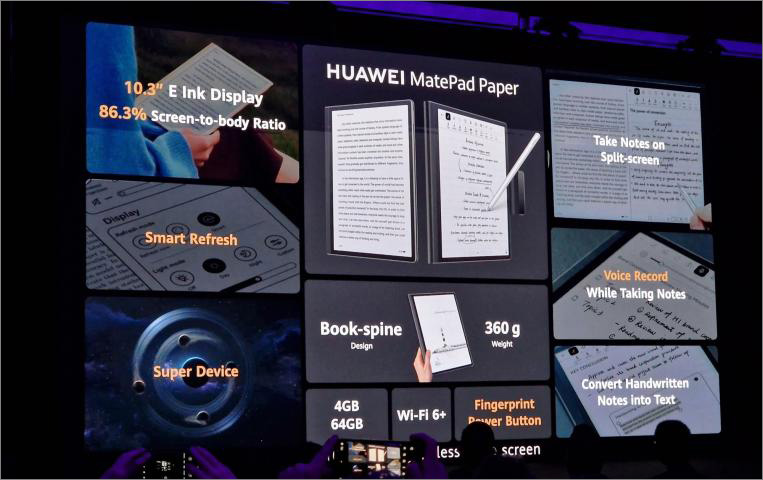 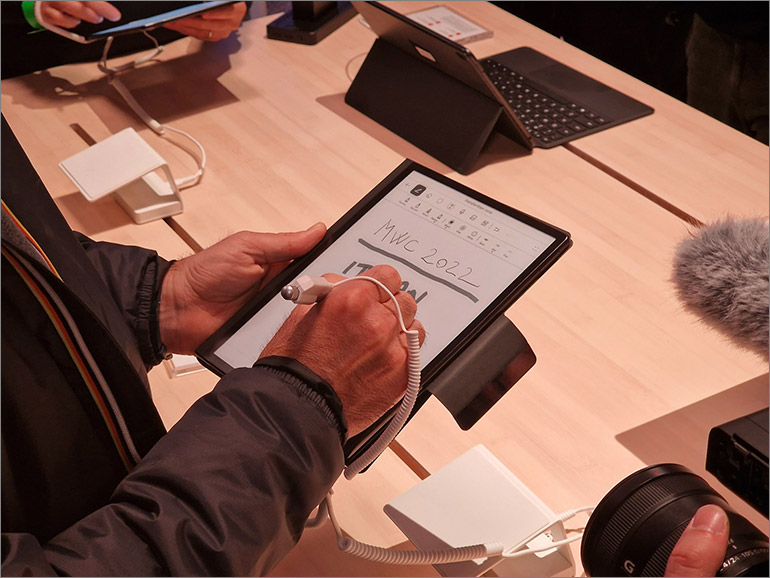