Dell has announced the arrival of the latest version of its popular XPS 13 high-end laptop. The PC maker has redesigned the 13.4-inch laptop and miniaturized the motherboard, the smallest ever made for a Dell. This reduced the thickness of the computer to 14 millimeters and its starting weight to 1.2 kilograms.

The new XPS 13 follows the release of Dell’s XPS 13 Plus, with an even more premium design, featuring a clear glass haptic touchpad and a row of backlit capacitive touch keys. The XPS 13 is the standard version of the laptop, and year after year it’s been one of CNET’s favorite picks, especially for those looking for a Windows alternative to Apple’s MacBook Air.

The motherboard of the new XPS 13 (right) is 1.8 times smaller than that of its predecessor (left).

In addition to reducing size and weight, the smaller motherboard allowed Dell to improve the laptop’s speaker design for louder sound and deeper bass. However, miniaturization also means that components, including memory and storage, as well as the battery, are not user-replaceable.

Earlier, Apple unveiled its latest MacBook Air with a 13.6-inch Liquid Retina display and the new M2 chip. Microsoft followed by delivering the Surface Laptop Go 2, a classic lightweight 12.4-inch laptop. While the new Air is offered at a higher price, Dell’s XPS 13 remains at its usual price in the US (prices are not yet known for France). 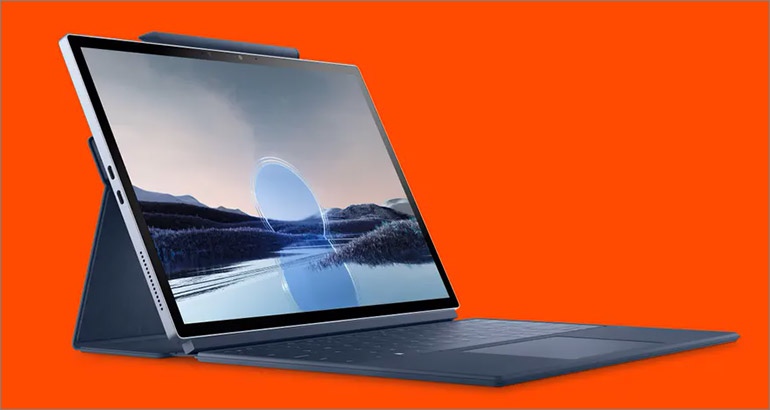 The two-in-one is equipped with a 1080p webcam on the front and a rear 4K camera. Additionally, the XPS 13 2-in-1 will have two wireless options, standard Wi-Fi 6E or 5G with Wi-Fi 6E. The 5G option is a first for the XPS line. Like Microsoft’s Surface Pro models, the XPS Keyboard Folio and XPS Active Pen will be sold separately. The XPS 13 2-in-1 is expected to be available this summer. No price has been announced.